The Red Kimono
by Jan Morrill 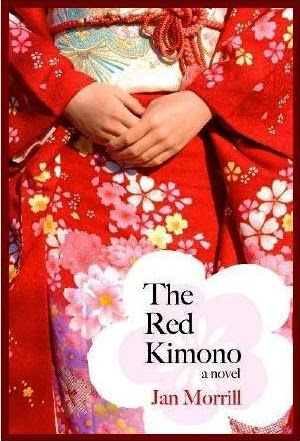 Summary: (from the publisher)
In 1941, racial tensions are rising in the California community where nine-year-old Sachiko Kimura and her seventeen-year-old brother, Nobu, live. Japan has attacked Pearl Harbor, people are angry, and one night, Sachiko and Nobu witness three teenage boys taunting and beating their father in the park. Sachiko especially remembers Terrence Harris, the boy with dark skin and hazel eyes, and Nobu cannot believe the boys capable of such violence toward his father are actually his friends.
What Sachiko and Nobu do not know is that Terrence's family had received a telegram that morning with news that Terrence's father was killed at Pearl Harbor. Desperate to escape his pain, Terrence rushes from his home and runs into two high-school friends who convince him to find a Japanese man and get revenge. They do not know the man they attacked is Sachiko and Nobu's father.

In the months that follow, Terrence is convicted of his crime and Sachiko and Nobu are sent to an internment camp in Arkansas, a fictionalized version of the two camps that actually existed in Arkansas during the war. While behind bars and barbed wire, each of the three young people will go through dramatic changes. One will learn acceptance. One will remain imprisoned by resentment, and one will seek a path to forgiveness

Review: Jan Morrill's debut novel is a beautifully written account of the Japanese internment during WWII, as told through the eyes of children.  While the historical details of life in the internment camp were informative and interesting (and frequently horrifying), I found myself reflecting most on the themes of racism and prejudice as they appeared in many different variations throughout the book.  In addition to the obvious Japanese/American tensions, Sachiko's mother demonstrates contempt for both African Americans and other classes of Japanese, and Terrence's time in prison highlights the difficulties between Caucasians and African Americans.  Although I appreciated the character development shown as each person worked through these issues, at times it felt like I was being beat over the head with the moral.  My only other complaint was that Nobu and Terrence often displayed understanding and articulation beyond their years, but I found the simplicity of nine-year-old Sachiko's observations to be refreshing.  The ending was surprisingly hopeful for most of the characters, and I am looking forward to reading the sequel.